The Chamber strives to promote the continuous improvement of the common good and the quality of life in the community through the pursuit of new business; the cultural, social, and economic education of our citizens; and by providing accurate and timely assistance to the business community. Become a member and get found in our online Member Directory. 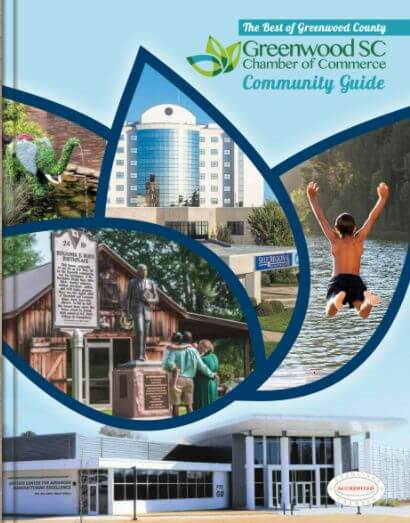 The Greenwood SC Chamber offers the opportunity to connect with other businesses, serve the community, and help Greenwood grow! Does your business want to join in on the fun and see what the Chamber can offer YOU? Call (864) 223-8431!

Is your company celebrating a milestone, grand opening, or new location? We would love to celebrate with you! Call (864) 889-9311 to schedule your ribbon cutting!

Barbara Ann Heegan began her career on a path of serving others as a Family Support Specialist working for the September 11 Recovery Program with the American Red Cross in Mineola, New York, close to her hometown of Elmont, New York. Immediately following the 9/11 attacks, the American Red Cross committed exclusively to the long-term service needs of people directly affected by the tragic event. Barbara Ann provided individualized service plans and service coordination for 122 families with children in Nassau County, including access to resources for mental health, case management, financial assistance and career planning services. Barbara Ann created the first 9/11 Family Support Group in Mineola, New York, an initiative that became a template for replication in New York City.

Barbara Ann’s career took another leap forward in 2007 when she was the first person hired as Marketing Director for The Plains at Parish Homestead, a new active-adult community for those 55 years of age and older. The community offers independent, assisted living, and memory care apartments in Oneonta, NY. Through effective marketing efforts, Barbara Ann achieved 100% occupancy in the assisted living apartments within the first 6 months after opening. She was instrumental in helping the facility achieve “The People Choice Award” from the Daily Star for 2011 Best Retirement Community. That same year, the Alzheimer’s Association honored The Plains at Parish Homestead with the Community Advocate Award.

In 2012 Barbara Ann’s next career leap was being named the President & CEO of the Otsego County Chamber of Commerce. She was hired to develop and maintain a collaborative working relationship with key businesses and regional Chambers to foster a nurturing business environment for members. In one year, Barbara Ann achieved a 50% increase in membership. She also developed new partnerships, grew revenue and generated a 40% increase in programs that were value-added member benefits. As a result, the next year, the Chamber was honored by The Business Council of New York State as its “2013 Chamber of the Year.”

Further honors followed Barbara Ann’s passionate work on behalf of the Chamber. The Chamber was honored in 2016 as the Non-Profit of the Year by the Greater Binghamton SCORE Chapter. This recognition resulted from the Chamber’s program working with Otsego County high schools to link students to job-shadowing opportunities with area businesses.

As a promoter of quality early education, Barbara Ann collaborates with area employers and early education providers to foster the fundamental skills that employers demand for 21st century jobs. Those skills include creativity, communication, team work, problem solving and critical thinking, all of which form in the first five years of life.
Barbara Ann is a member of the leadership team for Every Student Succeeds Act (ESSA) Coalition for New York State. The ESSA Coalition is dedicated to advancing equity and promoting college and career readiness for all students in New York State.

Barbara Ann is also a member of Equity Leaders Action Network (ELAN)/National Black Child Development Institute (NBCDI) Team, which focuses on raising the awareness of business leaders on the impact of expulsion and suspension in New York State. In recognition of this work Barbara Ann was the recipient of the 2017 Excellence in Leadership Award from The Early Care and Learning Council of New York State.

In August 2018, Barbara Ann was selected by the Association of Chamber of Commerce Executives to participate in a national professional development program designed to boost innovative community health initiatives. As a Chamber Executive she is one of 10 selected across the country representing New York with her active role in promotion of Mental Health and Prevention of Substance Abuse services and prevention of Chronic Disease.

Barbara Ann Heegan shares her life with partner Dr. Robert B. Pondolfino Jr. and is a mother to 3 children: daughter, Christina, and sons, Sean and Scott. As an animal lover, the family is completed by dog, Lucy. Barbara Ann is civic minded and ready to serve the community through volunteering at soup kitchens, community clean up days, and maintaining a strong focus on supporting healthy communities that help put better health within everyone’s reach.

Jacqueline Gilchrist is the Director of Member Services & Resource Development. She is responsible for developing and executing the Chamber’s membership sales strategy as well as developing and monitoring membership application process. She serves as a community resource for talent development opportunities. She has over 26 years of professional experience in business. She graduated from Anderson University with a Master’s in Business Administration.

Jacqueline is a native of Greenwood and is passionate about helping people. She is a proud mother of two children and enjoys playing sports and spending time with family and friends. She believes that every journey begins with a single step, and together we can continue to improve the quality of life.

Fresh from Clemson University, Amaan Monda is the Marketing & Communications Specialist at the Greenwood, SC Chamber of Commerce. He is responsible for social media, marketing, and other advertising efforts.

Amaan has resided in Greenwood since the age of 4, attending Lakeview Elementary, Northside Middle, and Greenwood High School during his time here. Amaan enjoyed playing sports throughout school, including football and basketball. After graduating from GHS in 2018, Amaan went on to attend Clemson University in the fall of 2018. At Clemson, Amaan’s favorite activities were attending the Clemson University football games, and spending time with his friends whether it be at the pool, at “Y Beach”, etc. Amaan graduated in 2022 with a BS in Marketing. Here he was able to grow his knowledge of the marketing field through many hands-on courses and a variety of guest lecturers from the business world.

Amaan is excited to come home to Greenwood to join the team at the Chamber. He is very happy to see how Greenwood has grown over his time here and looks forward to positively impacting his community in his new role back home.

With a career path focusing on serving the public through a variety of employment opportunities and volunteering in the community, Jody joins the Greenwood Chamber of Commerce Team as Executive Administration Assistant.

Jody says, “I love to experience new endeavors and being creative.” After graduating high school, she attended the University of Nebraska and from there has really enjoyed collaborating with people and children. Through Banking Services, Director of Children’s Programs, and Medical Financial Advisor she has become well versed in aspects of administrative work. She loves to be active and productive within the community she resides.

She and her husband have two children and seven grandchildren! They recently moved to South Carolina to be closer to their daughter. Searching for their new home brought them to Greenwood. They enjoy the local businesses, the beautiful weather, the fun activities and especially the wonderful people who make Greenwood a wonderful place to live. If you see her around town, be sure to introduce yourself, as she wants to get to know you too.

Thanks to Our Investors